The Sketch can be downloaded from my GitHub page here and includes the L9110 datasheet.

I came across this somewhat strange board advertised as a Fire Fighter with the claim that the fan was so strong it could be used to put out a flame! With a claim like that I just had to buy one, but I must confess that I have no idea what I will do with it.

The Motor Driver is an L9110 single motor driver that has two inputs INA and INB with two wire out that can drive a small DC motor. It seems to be designed to be used in toys and small robots. INA and INB are driven by logic signals, both inputs set to LOW and the motor is still, with INA HIGH and INB LOW the motor will turn one way and it will turn the other way when INA and INB are reversed.. Two other pins on this board are supplied with  5 volts (Vcc) and Gnd from the Arduino. INA and INB could be supplied with logic signals from any of the digital pins, but the motor speed would not be variable as it would run at full speed in either direction.

PWM can be used to drive the motor at variable speed in either direction and this is what the sketch here does. I found that the lowest stable speed was when the PWM was set to 80, up to the maximum of 255. Below 80 and the speed was a little erratic. I have used a KEYES momentary push button to demonstrate the motor. When the sketch first runs the motor is still. Press the button and the motor rotates, press it again and the motor stops for a brief moment then rotates in the opposite direction. On the third press the motor stops. The short delay when changing direction allows the motor to slow right down first. 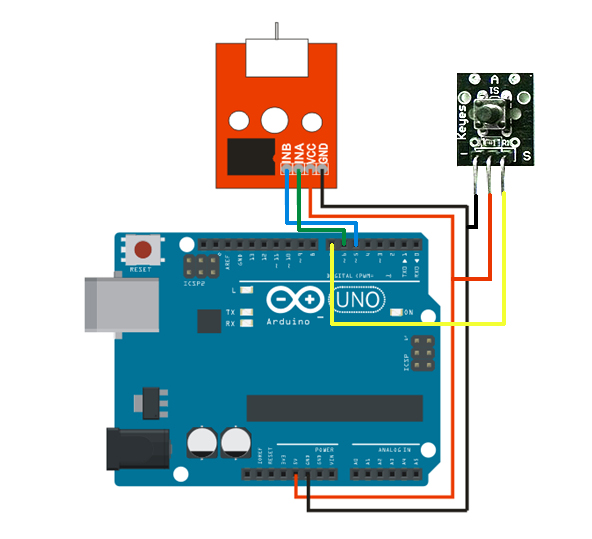